Updates! Metalica Walks, Knights of the Black Moon, March of the Fire Masters

It's been a few months, I started a new job in April and things have been hectic ever since! But, the forges have not been silent! In fact I've had a bit of an upsurge in productivity, I think the dissipation of the cloud of depression which was hanging over me at my old job has been largely to thank for that but whatever it is I'm happy to be getting back into my various projects (and starting a few new ones).

Last we left of  Mors Incarnadine was complete and the Reavers were on the bench, well, I now have a complete Axiom Maniple and and additional Warlord!

And the extra Warlord?
Metalica Primis was my first attempt at freehand on the titans since I can't see GW/FW giving us Metalica transfers and time in the next decade given were almost 12 months into AT's release and we still don't even have full loadouts for Reavers or Warlords!

I've since applied weathering powders to Metalica Primis and my next job is get the freehand symbols and transfers on the other Metalica engines.

I got a few lightbox shots of the first Maniple (apart from Hastati Lux for some reason) a while ago, I've also since drilled the barrels! Once the Freehand, decals & weathering are done I will go back and get shots of all the Metalica engines. 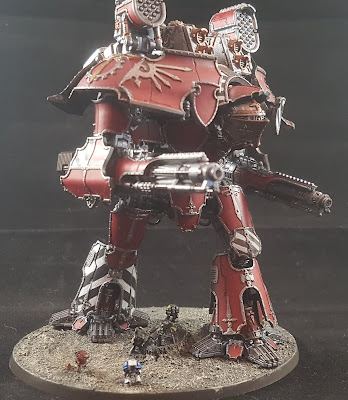 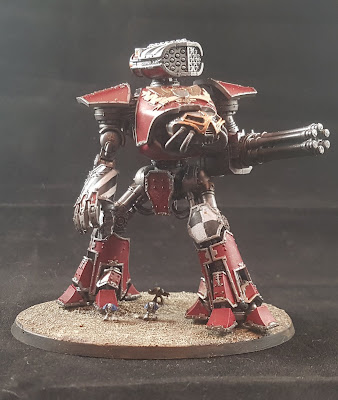 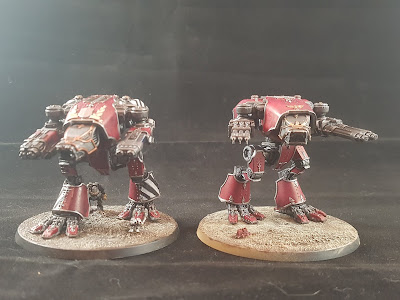 Knights of the Black Moon

Once the Metalica engines were finished my next job was knights.  I've always liked the Knights, even the gangly classic knights from AT's first incarnation (I even have some, knocking about somewhere).  So I wanted a knight household to support my engines, enter House Hyperion! 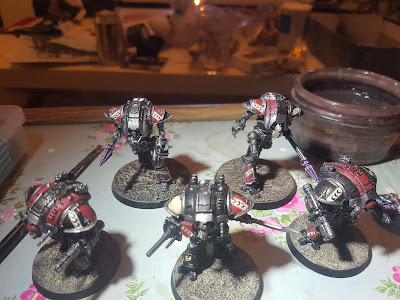 I don't know what it was about Hyperion but when the 40k scale Knight was released however long ago that was I settled on Hyperion then. 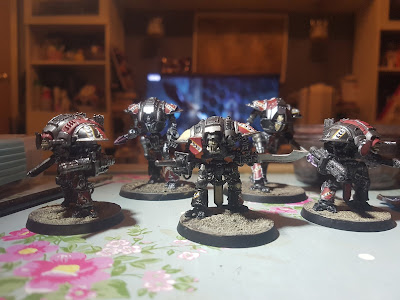 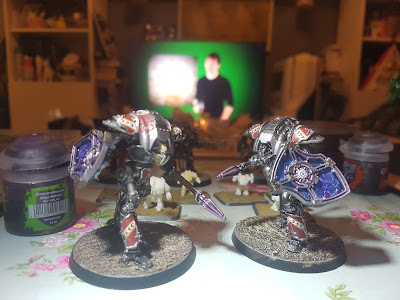 I feel like I could do a better job on the crescent moons but for now they will do.  I wanted the Lancer's shields to have an energy bubble look to them so the shields are backed with clear blue plastic with Woodland Scenics water effect stippled onto them followed by a was of Druchii Violet. I'm happy with the effect and will be rounding them out to two full lances.

They've also got some reinforcements on the way in the form of a pair of Knight Porphyrions. 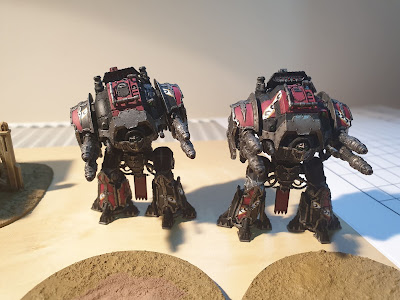 There will be more knights joining them soon enough, once I find both time and funds between all my other projects...

Enter the Fire Masters, infamous world burners and turncoats!  A few of my friends are into the idea of AT but not the buy in cost which, I will admit, is a hard pill to swallow, so I had already resolved myself to the idea I was doing two legios (which has now upped to four in my mind, but thats a story for another day).  A stroke of luck however picked me up the battleforce (1 Warlord, 1 Reaver, 2 Warhounds) for £65 on ebay! 4 titans for the price of a Warlord, I couldn't pass it up. 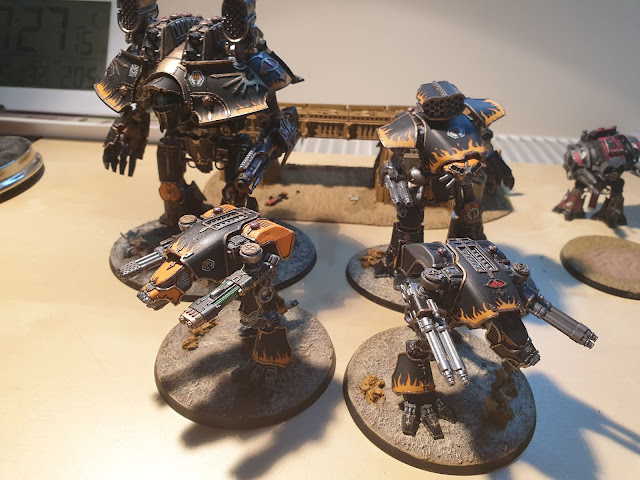 And now they're mostly finished!  I've got the bases to finish off then its decals and weathering to finish them.

Unsure where to go with names, I started googling some of the distinctly not latin names of known Surturvora titans, namely Denala, Ashima and Su-benoth, this led me to Babylonian & Mesopotamian mythology, which gave me a nice starting point. armed with that my times are.

The flames were a bit daunting at first.  Luckily the sets come with enough extra panels for practice purposes!

Other bits and bobs

So I keep getting side tracked with other projects as well, like these 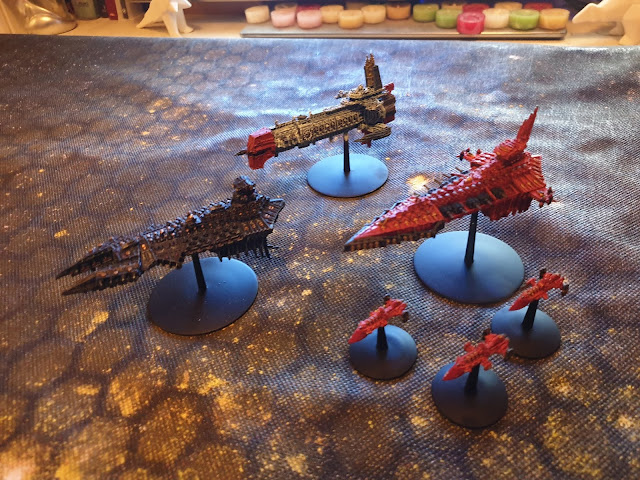 I loved BFG back when it was released. and since I was doing my 30k army two scales already I figured why not move to a third one... so here we have the VIII Legion Battleship Void Wraith, the IX Legion Battleship Regalia and its, as yet unamed, escorts and the Mechanicum Ark Eternal Equation.  They're not finished yet but jsut need a bit more detail work.  Interestingly, two of the battleships are recasts but you would never know now there's paint on them.

And my other project on the bench?  He knows nothing... 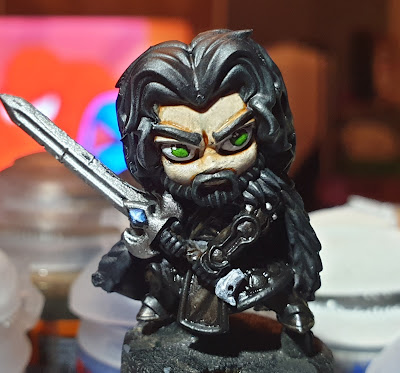 I couldn't pass up chibi none copyright infringing Jon Snow, renamed to Black Snow from Ninja Division (Soda Pop Miniatures as was). but what is the Bastard of Winterfell without the goodest boy! 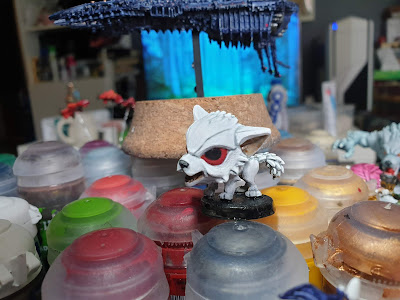 So taking one of my leftover wolves from the Impact Miniatures kickstarter he now has his own non copyright infringing Ghost, which I have named Spook.

I plan to try and keep this updated a bit more regularly so, until next time...
Posted by AmyC at 05:54